When you retail a product or provide a service, you expect being paid. But do you know your clients and their solvability? Despite all your safety measures, you are never fully protected from a bad payer or from bankruptcy of a reliable debtor which you sought unfaltering.

The export credit insurance is designed to cover Luxembourg exporters against the non-payment risks of their clients, whether those risks arise from political or commercial origin.

The foreign investment insurance guarantees the investor against political risks that may arise in the host country.

The pre-shipment insurance facility is addressed to Luxembourg importers who need to pay down payments to their foreign suppliers. 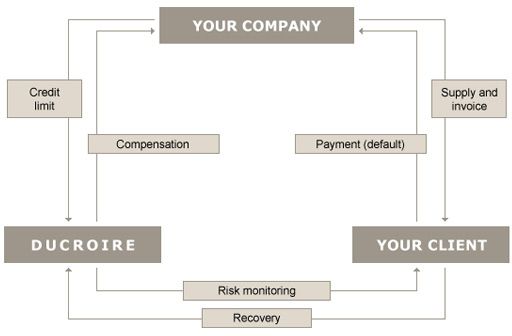 The insurance covers the risks of insolvency or payment default of your client as well as the political risks such as the risk of currency transfer, war, revolutions, natural disasters and risk of expropriation or government action.

For each exporter, a framework agreement is established, defining the scope of the insured contracts, the applicable premium rates as well as the general insurance conditions.

Due to their nature and complexity, special cash transactions are commercial and industrial operations that require a particular approach and follow-up. Special transactions particularly relate to construction works or engineering contracts which extend over several months and whose payment conditions are depending on the progress of the work performed.

The insurance of special cash transactions does not only protect against the risks of cancellation and payment default of the buyer, but also against political and similar risks, such as the risk of currency transfer, war, revolutions, natural disasters and risk of expropriation or government action.

The risk of unfair calling of the bank guarantees to be issued by the exporter may also be covered.

The Office du Ducroire may cover buyer credits funded by banks in order to allow foreign buyers to finance export transactions of contracting equipment, services or construction works, as well as supplier credits which the exporter may arrange for its foreign contractor.

Under a buyer credit, the bank directly grants the loan to the customer at the request of the exporter in order to finance export transactions of contracting equipment, services or construction works. The exporter can draw on the loan and thus receive cash payment for the delivery of goods and services made under the commercial contract.

As a lender, the bank may wish to arrange insurance against the risk of non-payment of the foreign buyer. Thus, the Ducroire may cover the lending bank against the risk that the customer defaults in whole or in part on the buyer credit (principal and interest) or only lately repays the debt. The origins of the non-payment may be twofold, either political or assimilated risk (risk of currency transfer, war, revolutions, natural disasters and risk of expropriation or government action) or commercial/buyer risk.

This cover may also be applied to other forms of medium- and long-term credits, such as:

Via its bank, the exporter may offer deferred payments at a fixed interest rate, thanks to the interest rate stabilisation tool(1) of the Ducroire.

As a credit provider, the exporter normally seeks to be covered against the risk of payment default of the foreign buyer. Besides the non-payment risk, the exporter is also exposed to the risk of contract termination by the buyer prior to delivery (cancellation risk) and the risk of unfair calling of bank guarantees, issued on the exporter’s instructions. These risks may also be covered by the Ducroire.

In most of the cases, the exporter may wish to transfer to his bank the financing of the extended credit terms offered to his customers. This kind of refinancing will either take the form of a discounting operation with or without recourse against the exporter. If the refinancing is done by the bank, then the latter will become the beneficiary of the insurance policy.

The Ducroire covers the risk that the customer defaults in whole or in part on the supplier credit or only lately repays the debt, either due to political or assimilated risk (risk of currency transfer, war, revolutions, natural disasters and risk of expropriation or government action) or from commercial risk.

This insurance may also apply to other forms of medium- and long-term credits linked to export transactions such as the operational leasing.

Via its bank, the exporter may offer deferred payments at a fixed interest rate, thanks to the interest rate stabilisation tool of the Ducroire(1).

(1) A material advantage of a buyer credit guaranteed by the Ducroire is the possibility for the exporter to offer a fixed interest rate on the loan via the lending bank. Therewith, the buyer may anticipate the financial burden which will be incumbent upon him over the whole credit period.

The minimum fixed interest rates to be charged are laid down by the OECD Arrangement on the basis of the CIRR (Commercial Interest References Rates), which are set monthly.

The Ducroire’s intervention consists in the difference between the guaranteed stabilised interest rate (CIRR) and the rate which banks have to pay for their refunding on trade markets (Euribor or Libor), to which is added a banking commission/margin.

The Office du Ducroire may cover the bank guarantees the exporter has to arrange in favour of the buyer in order to guarantee his contractual obligations. In some cases, the beneficiaries under such guarantees can claim against them “on first demand” without having any proof of the exporter’s fault.

The Ducroire’s insurance of contract guarantees protects the exporter against both unfair calling of the bonds and calling due to a political event or decision.

Guarantees that fall within the scope of the cover are bid bonds, advance payment bonds, performance bonds, etc.

The exporter may be required to emit a bid bond when participating in a tender or public procurement, in order to assure the buyer against a possible withdraw of his contract offer or refusal to sign the contract once it has been awarded.

The advance payment bond enables the buyer to recover the down payment made to the exporter in case the contract should not, or only partly, be performed.

The performance bond is emitted in order to guarantee the buyer that the contract will be performed within the agreed timeframe and according to the terms of the contract.

The insurance of contractual guarantees is generally provided under a single and common policy together with the basic insurance for the export contract. For the insurance of bid bonds, however, a separate policy is drawn up.

Foreign investments, especially in emerging countries, may be related to political uncertainty. The statutory framework in such countries often lacks legal certainty and foreign investments can be affected by sudden political changes or arbitrary government action.

Many forms of investments may be insured. The most common are:

The investor is compensated for full or partial loss of the investment and for not being able to transfer the invested funds out of the host country, provided the losses are the direct consequence of one of the following political events:

In order to qualify for compensation, the sustained loss must be final and irreversible.

The insurance normally covers the capital value, but may be extended to the investment income (interests and dividends) as well as to potential further investments.

This insurance is designed for Luxembourg importers, who have to make an advance payment to its foreign supplier. In case the foreign trader is not able to carry out his commitment to deliver, he will be called to reimburse the advance received from the Luxembourg importer.

The Office du Ducroire covers the risk of non-reimbursement by the debtor of the advance and interests inherent to the contract modalities.

Generally, the down payment must remain limited compared to future imports and rarely exceeds 50% of the contract value.

The insurance of guarantee commitments for banks was launched in January 2015. This policy is a new product offered by ODL to fill a gap in the market. Through insurance granted by ODL, it creates leverage for credit lines that banks grant to Luxembourg companies. 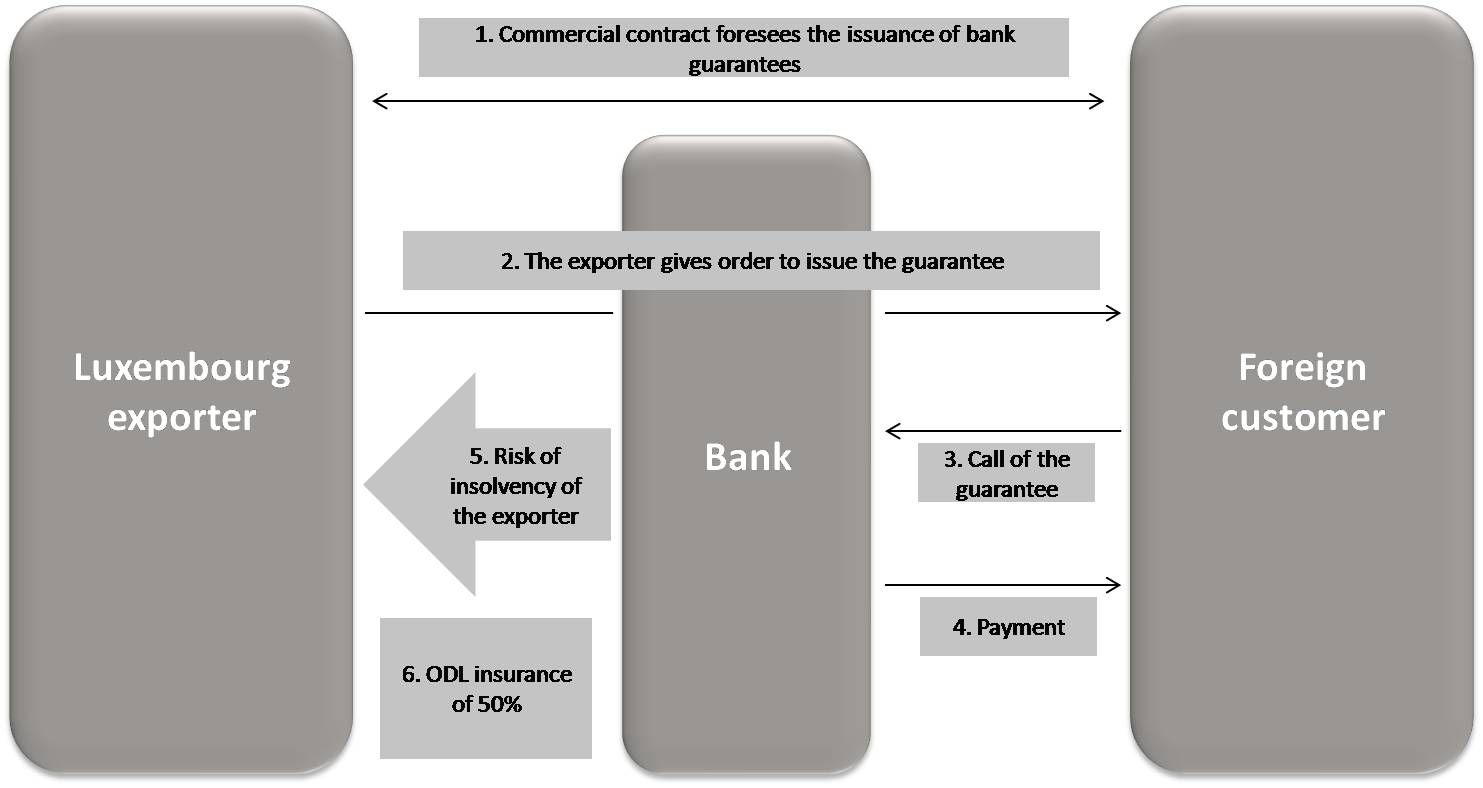 ODL covers the bank against the risk of default of the exporter. The exporter may apply for cover against unfair calling of the guarantees.

A framework policy is signed between the bank and ODL. This document sets out the terms and conditions between the insurer and the insured.

The exporter must be a company registered in Luxembourg and needs to be active internationally.

Insurance of bank loans enables banks to reduce their risk by covering part of their loans for their clients’ international activities against the risk of non-repayment. This protection will allow banks to grant higher credit lines to Luxembourg companies aiming to expand their business beyond our borders.

The Top-up policy offers the possibility to cover, on a case by case basis, an additional amount to the coverage offered by the main credit-insurer. This formula has been set up in order to complete punctual gaps between the coverage needed by the Luxembourg exporters and the coverage available on the private market.

The percentage of coverage is the one foreseen and applied by the main credit insurer for the calculation of its compensation. The insured sum per debtor equals the amount of the credit limit in addition to that laid down by the basic credit insurer.

In case of a loss, the Luxembourg Government will only interfere after intervention of the basic credit insurer. The private insurer will cover the first losses up to the credit limit insured by him. Only the losses exceeding this limit will be covered by the State up to the credit limit provided under the Top up policy.

In this context, an envelop of EUR 35 mio has been provided by the Luxembourg Government.